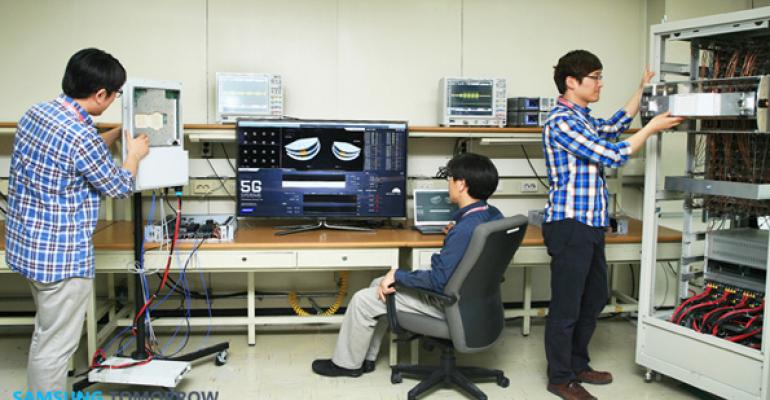 Wireless is going to be fast ... in the future

Samsung this week claimed to have made a technological breakthrough that will enable true 5G wireless networks with speeds “several hundred times faster” than today’s wireless networks. The catch? It won’t be commercially available until as late as 2020.

“Samsung’s latest innovation is expected to invigorate research into 5G cellular communications across the world,” a Samsung statement reads. “The company believes it will trigger the creation of international alliances and the timely commercialization of related mobile broadband services.”

Samsung claims the new 5G (or fifth-generation) wireless network enables users to download and upload data at speeds of up to tens of gigabits per second (Gbps), compared with the 75 megabits per second (Mbps) limit on today’s 4G LTE networks. It says the platform will provide “ubiquitous” 1Gbps connections to subscribers “anywhere.”

Samsung says it has overcome previous limitations with wireless connectivity by creating a new adaptive array transceiver technology that transmits data in the millimeter-wave band at a frequency of 28GHz at a speed of up to 1Gbps to a distance of up to 2 kilometers. It uses multiple antennas to overcome radio propagation loss.

Pervasive wireless connectivity at these speeds would of course be a game changer. Samsung hopes that its work will “trigger the creation of international alliances and the timely commercialization of related mobile broadband services.” That said, it’s worth noting that both the European Union (EU) and China are separately researching 5G technologies of their own.