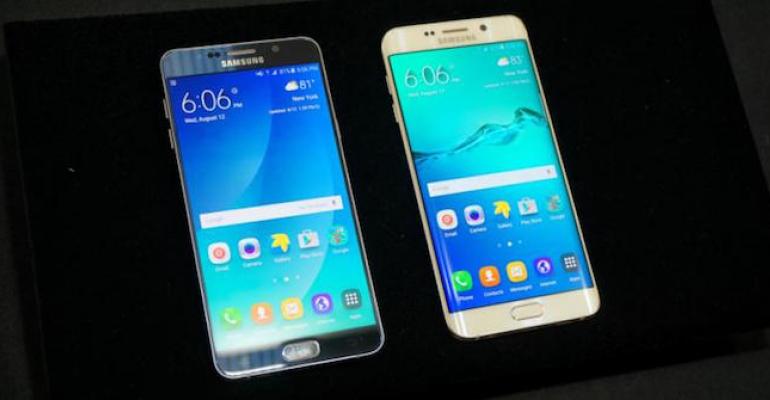 Review: The Galaxy Note 5 is the best Android phone you can buy

The Galaxy Note 5 has always stood apart from other Android phones. It was big before giant phones were cool and included a stylus even when multi-touch was all the rage with the success of the iPhone.

Now, it’s not the only big phone on the shelf. Can the Galaxy Note series remain as a compelling option? The short answer is yes, but be prepared to pay a premium price.

The Galaxy note 5 is a true benchmark product for all the right reasons. It’s a beautiful, bright, and ultra-fast smartphone that is the best Android device you can get. But Samsung’s new found religion of glass and metal mean a price that’s right up there with the latest iPhones. It may be a tough sell for many in a world where subsidies are just disappearing fast and good-quality smartphones can be had for $400 or less.

Once derided for its excessive use of plastic, Samsung now builds the best looking Android phones out there. The Note 5 follows the new pattern that Samsung set with its Galaxy S6 and S6 Edge, ditching the plastic, removable back for an all glass-and-metal aesthetic.

The Galaxy Note 5 looks great, though the all-glass build is quite slippery.

This may upset power users, especially for the Note series, who have come to count on a removable battery and additional storage with an SD card. Also gone is the IR blaster, which allowed you to use your phone as a TV remote,

They’re not deal breakers for me, as the support for fast charging, portable battery packs and wireless charging pads are way more convenient. And with music streaming services there’s no longer the need to keep most of your music collection on your hard drive. Google Photos and other backup services can clear up your space by backing up all those images and video to the cloud.

But you may miss having an SD card, especially since the largest storage option available is 64GB. When you load up your phone with 4K videos and a ton of pictures, that space starts to disappear fast. It’s a tradeoff some might not be able to make.

But beyond that, the overall appearance is quite stunning. Yes, you’ll definitely spot some unmistakable design inspirations from the iPhone. But everybody borrows, and the slimmed down appearance and polished design are much appreciated.

A MUCH SLIMMER AND REFINED TOUCHWIZ

Writing anything positive about TouchWiz is not something I ever thought I’d do. TouchWiz is Samsung’s custom UI that tweaks Android. In most cases it’s been terrible - slowing down the overall experience and reconfiguring the settings in needless ways.

Starting with the Galaxy S6, Samsung appears to have finally listened to all the complaining. My Galaxy Note 4 can get slow, glitchy, and struggles to scroll any content smoothly. And my model, which is on AT&T, STILL is stuck on Android 5.0.1, instead of the most recent Android 5.1.1. So on the one hand it’s good to see that Samsung has stepped up its software performance. But the company still needs to better care for its current devices in order to win over new buyers, who will need to fork over $700 for one of its new phones.

However, you still need to spend about 15 minutes uninstalling the terrible browser, mail, messaging app, and other pieces of bloatware. But with the right amount of work you’ll be rewarded. The best new software feature is themes, which allows you to skin the overall look of the home screen. There’s a great Material theme if you want something that looks akin to stock Android. It even changes the dialer to look like the Nexus model, which is much cleaner than what Samsung built.

This new look combined with some of the flexibility encouraged me to stick with it, whereas I typically opt for the Google Now Launcher. You can opt for a 5x5 or 4x5, or 4x5 grid and more easily choose a widget as they're neatly categorized. You’re stuck with the apps grid icon on the right, but it’s a minor inconvenience.

The raison d'etre for the Note is the S Pen. If you just want a big Samsung phone but don’t need a stylus, then maybe the Galaxy S6 Edge+ is for you. Though the stylus is pretty great, and this year’s edition includes one that is more robust that you click like a ballpoint pen to remove. The S Pen itself is sturdier than previous models and feels more like a writing tool than a cheap, plastic stick.

But first, a PSA: putting the S Pen backwards into your phone could get it stuck. You’ll then have to yank it out to dislodge it, which may break the phone’s tool that tells it when the pen is tucked inside. Samsung has acknowledged this issue, but you won’t get any sympathy from the company about it. The official response has been to follow the instructions - you know, the ones you don’t read when you get a new smartphone. Part of that is because they’re not even in the box - you have to get them online.

Also, Samsung gives you more control over what apps you can launch with it - add up to three of your own choices that will appear when you pop out the pen.

The Air Command feature launches when you dislodge the S Pen.

However, the neatest trick is the ability to  write a note without unlocking the phone. Just pull out the pen, write your note on the black screen, and then it’s saved to the S Note app. This came in handy often, for those moments when you want to jot something down but don’t want to go through the laborious process (at first world one, anyway) of unlocking the device and picking the right app.

Other tools are similar to the Note 4, though with nice refinements and other enhancements. You can save all your doodles, screenshots, and other inking to the S Note app or to Evernote. But in general the Note 5 software has a better organizational structure and appearance than previous editions.

The ability to split-screen supported apps is also a nice feature of the Note, which makes that big screen even more useful. Writing an email with one window while getting information from Chrome in another is desktop-level efficiency.

I did find on occasion the S Pen would become detached when I’d pull it out of my jeans pocket. I’m not the skinny jeans-wearing type, so I can eliminate that as a possibility. It could be the edition I have.

If you’re into specs, you’ll be impressed at what the Galaxy Note 5 packs in. Samsung’s decision to use its own Exynos 7420 processor has paid off, as performance absolutely flies. There are none of the hiccups and glitches that you often see on an Android phone, even what I experience typically with my Note 4. It’s another testament to how Samsung has tamed its software.

On the spec front, the Note 5 also has 4GB of RAM, and of course the impressive quad HD, 1440 x 2560 pixel display with a 518 ppi pixel density. But don’t take it from me - analyst DisplayMate recently awarded the Galaxy Note 5 the title of “best smartphone display.”

The other reason I would strongly recommend the Note 5 to someone who wants a great Android phone is the camera. Whether indoors or outdoors, it produces fantastic images. The color quality could suffer some from low light, though this is an area all smartphones still are grappling with.

Great-looking outdoor shots are easy to come by with the Galaxy Note 5.

Another neat trick: double click the home button when the device is unlocked to launch the camera. A great camera with an easy method to snap a quick photo is a real boon for quickly capturing pictures.

The battery life was … OK. You can get through just about a day of moderate use, but it’s not going to win any awards. To make up for this Samsung has included support for fast charging - with the included charger you can get full life in just over an hour. And I also used a Tylt Vu charging mad provided to me for testing - being able to set your phone down and let it charge is a major convenience.

As for other essentials, phone call quality was solid enough and the speakers were acceptable. It’s nothing immersive or any type of competitor to computer speakers, but at least Samsung no longer puts them on the back of the device.

Finally, there’s a Galaxy Note that finally has an excellent fingerprint sensor. It works just as smoothly as Touch ID on the iPhone 6, quickly unlocking the phone. It will get even more useful as Google builds in fingerprint sensor capabilities to Android Marshmallow.

SHOULD YOU BUY IT?

So the critical question: should this be your next phone? There are a few factors to consider. If you want the functionality of a stylus, this is pretty much your best option. Also, if you crave the absolute best hardware, screen performance, and camera, then this is the phone to get.

However, it’s expensive. Depending on your carrier, you’ll pay upwards of $749 or more for a Galaxy Note 5. Also, if you came to love the expandable storage, removable battery, IR blaster, and other power features of the previous editions, you’re out of luck.

Android purists may also want to wait to try out the Moto X Pure Edition (I have one in hand and will have a review soon) for a stock experience and more pocketable price tag. But if you have the cash and don’t mind the move away from all the extras you just might love the Galaxy Note 5.