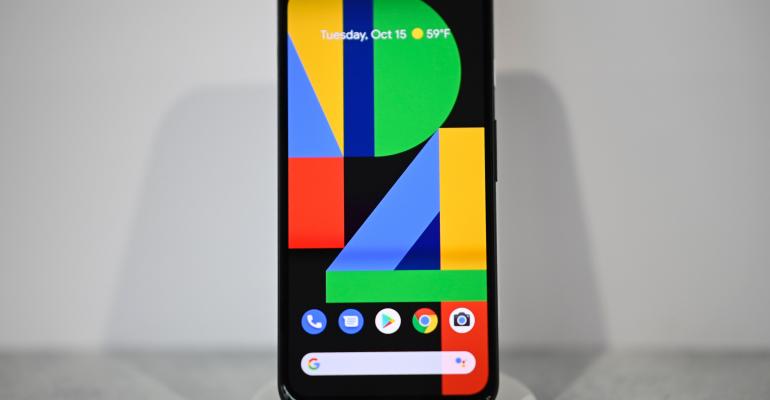 Google is hoping the new AI-heavy 5.7-inch Pixel 4 and 6.3-inch Pixel 4 XL will get its high-end Pixel phones out of their rut and help them better compete with the iPhone.

(Bloomberg) -- Google on Tuesday showed how it will attempt to get its high-end Pixel phones out of their rut: A combination of familiar Apple Inc. and Samsung Electronics Co. technology, the addition of juggernaut carrier AT&T Inc. and cutting-edge camera and digital-assistant features that showcase the company’s lead in artificial intelligence.

The new models -- the 5.7-inch Pixel 4 and 6.3-inch Pixel 4 XL -- have redesigned cases with a new camera bump and an additional lens alongside a much-improved display with smoother animations and facial recognition to replace yesteryear’s fingerprint sensor. Google also increased the memory to 6GB, addressing a pervasive complaint about overly frugal specs on last year’s devices.

A new radar-based motion sensor lets people control the Pixel with hand gestures in the air, and it will also detect users’ presence and attention to keep the screen on while reading. Google Assistant is more capable and deeply integrated than ever, extending a lead on Apple’s Siri voice assistant and Samsung’s Bixby.

Google started designing its own consumer hardware a few years ago to generate new revenue growth beyond advertising. The home-grown gadgets also help the company control the distribution of its web services, reducing reliance on other hardware makers.

Still, the Pixel line has never sold particularly well, despite some of the best tech and consumer reviews. The company will be hoping this fourth iteration addresses the malaise with novel features, such as user-detecting radar called Motion Sense, and good catch-up features like extra camera lenses and memory.

The facial-recognition sensor on the Pixel 4 appeared fast in a demonstration, working in concert with the Motion Sense feature. Motion Sense alerts the phone that a user’s hand is approaching to pick up the device, which in turn triggers the facial sensor to turn on and start scanning, leading to a quicker unlock. Apple has had Face ID on iPhones since 2017, but Google‘s implementation is a different approach.

The Pixel’s face authentication will work with some payment apps, including one from Citigroup Inc., and face data will be securely stored on the device, according to Google. The motion sensor also lets users navigate between songs, snooze alarms, and decline calls with a hand gesture.

Google highlighted its new zoom lens on the back of the Pixel as the most significant 2019 addition to a device that gets its name from the emphasis on photography. Apple added a second lens in 2016 with the iPhone 7 Plus, but Google has long maintained that it can make up the hardware gap with software. That story doesn’t change this year: Google argues that its imaging software is the best and the new lens only helps it extend that capability across a wider range of zoom. The company has developed a whole new image-processing pipeline for its zoom feature, borrowing from its advancements in nighttime photography with Night Sight.

The new Pixel cameras will show a live preview of what the image will look like before it is captured -- a subtle but important improvement in an era of sophisticated image processing. Google has also added a dedicated slider for controlling shadow exposure for more advanced photographers, and a so-called astrophotography mode will let even amateurs capture detailed images of stars at night with a tripod and four minutes of exposure.

The Pixel’s updated voice assistant has a new swipe gesture for launching, on-device processing for tasks that don’t require the internet, and the ability to open specific pages or menus within apps upon a user’s command. Google has added a new voice-memo app with on-the-fly transcription, which worked well in a demonstration. The new phones also include car crash detection and can automatically call emergency services.

The smaller Pixel 4 has a 5.7-inch screen, slightly bigger than last year’s model, though the overall size hasn’t increased. That matches the dimensions of the iPhone 11 Pro. The Pixel 4 XL, at 6.3 inches, sits in between the iPhone 11 and iPhone 11 Pro Max screen sizes.

The new Pixel phones will cost $799 or $899 depending on screen size, and extra storage will cost more. That pricing positions the Pixel 4 $100 above the iPhone 11 but $200 below the iPhone 11 Pro line. Despite the unique new technology, such pricing will likely continue to be a pain point for the high-end Pixels as the new models are no more affordable than the Pixel 3 of last year.

In the first quarter of this year, Alphabet Chief Financial Officer Ruth Porat said the Pixel 3 didn’t sell well, attributing a year-over-year decline to heavy promotions in the smartphone market. Google wasn’t the only phone maker to struggle in the quarter, with Apple reporting its first annual holiday quarter sales decline in nearly two decades on the heels of lower-than-expected iPhone sales.

The Pixel 4 phones go on sale Oct. 24 and pre-orders begin on Tuesday. Google will be selling the phones through all four major U.S. carriers for the first time. They will come in 64 GB and 128 GB capacities, with 6GB of RAM, and in a choice of orange, black or white.

The new models, like Apple’s latest iPhones, lack fifth-generation cellular connectivity despite many 5G networks kicking in over the next 12 months. Google said it is working on 5G technology, but wouldn’t say when a 5G Pixel model would launch. Apple plans to launch a 5G iPhone around next September, while Samsung started shipping 5G phones earlier this year.

Google also showed off new Pixel Buds headphones that are built to rival AirPods. Unlike the previous version, they are cordless this time. They will launch next year for $179 and have 5 hours of battery life.