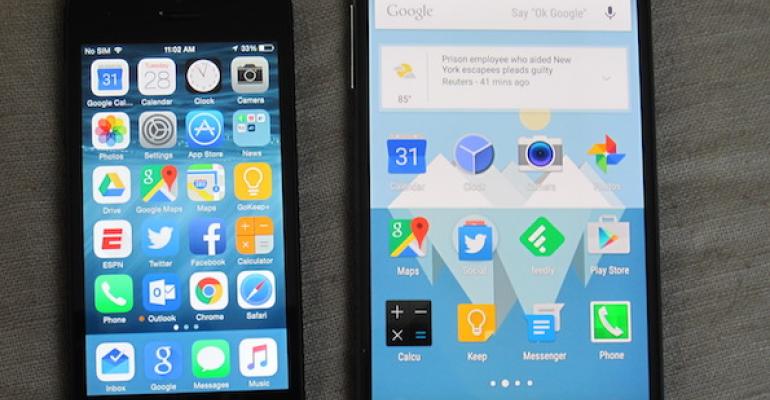 With a ton of new phones and a fresh version of Android coming this fall, it’s a great time to make the leap to Android. The grass is certainly greener (so is the robot), though changing platforms is always a pain.

While Google has a pretty good guide, experience has shown there are some nuances to making the switch. So if you want to move to Android with the least pain possible, here’s what you need to do.

Why to make the switch

It may seem like you’re swimming against the crowd by ditching iOS. The iPhone is an incredible cash cow for Apple. And if you look around on any street corner you’re going to see a lot of iPhones.

But as someone who switched a couple of years ago I can assure you that it’s a liberating move. Android is for those who want to bend their device to their will. You can throw on a custom launcher. Change up the lock screen. And never think about iTunes again.

Another major incentive is the deep integration with Google services. It makes Android ideal for productivity as Google’s core apps like Gmail, Drive, Chrome, and others can interconnect in deeper ways than they’re allowed to on iOS. And with Android you get the full version of Chrome -  not one held back by Apple's limitations. Chrome on iOS can’t have its own engine, so it’s essentially another version of Safari with Chrome branding and features.

If these are the type of criticisms you have of iOS then it’s time to move over.

If you don't have one already, you'll need a Google account in order to sync your device with Google and buy apps from the Play Store.

If you don’t have one, you can sign up from the launch screen on your new device. By signing in to an existing account all the “stuff” from your existing Google services will move over. You’ll just have to sign in to Gmail, Chrome, or other apps and your content will be right there. No other work needed.

To buy apps, you’ll need to add a credit card to your Google account. You can keep tabs on it with Google Wallet (that’s kind of the Google way, one service gets you another), which you can then use for buying items with your phone if it has an NFC chip.

The Google Play Store is the hub for not only apps, but games, music, books, and other media. Unlike the App Store Google tends to tweak the look and layout often, so keep an eye out for such details.

Figure out how to move your contacts, photos and other digital assets

The biggest hangup for switching platforms usually has to do with contacts, photos, and music. Let’s tackle those one at a time, highlighting the least cumbersome way to make the transition.

What you need to do depends on how you currently manage your contacts. If they’re backed up to iCloud (the norm if you’ve been using an iPhone) go to icloud.com and log in with your Apple ID. Then click on Contacts and Select All. If everything is highlighted, then click Export vCard. Choose a place on your computer where you won’t forget where it’s saved.

Then sign in to Gmail, then click the “Gmail” link and select “Contacts” from the drop-down menu. Then from “More” click “Import.” If you’re in the new version of Google Contacts, you’ll be prompted to revert back to the old version.

If you already use Gmail, your contacts will move over without a problem. If not, you may need to transfer them with iTunes on your computer. Open the Info tab in iTunes and select “Sync contacts with” and choose “Google Contacts” from the drop-down menu. Sign in with your Google account credentials and they’ll flow over.

For email, if you use Outlook.com, Yahoo, or another email service the best bet is to sign in to that account with the Gmail app, which handles Exchange, IMAP, and POP.

If your music collection is in iTunes, the best way to move it over is to upload the contents to Google Play Music.

You can do this in the Play Music web app by going to Upload Music from the slideout menu. You can do this in one batch, or download the installer if you’re looking to sync your playlists. Additionally, if you subscribe to Spotify that’s easy: just install the Spotify app. If you subscribe to Apple Music hang tight: Apple is building an Android app for release this Fall.

You can’t go wrong with the new Google Photos service. If you import your pictures they’ll be backed up to your Google account and easily viewable on your Android device.

Google Photos promises unlimited storage, though your images will be “slightly” compressed. If you want the full image, you can do that but the storage will count against your Drive limits.

The easiest way to move them over is to install the app on your iPhone. Then launch it and agree to backup all your existing images.

However, there are several other apps that you can use for keeping all your images backed up, like Flickr, OneDrive, Dropbox’s Carousel, or Amazon Photos if you’re a prime subscriber. While hardcore Android tinkerers may like the idea of uploading the files manually, it’s no longer worth the effort to do so.

This is another important step. Previously, your text conversations with other iOS users went through Apple’s servers (the blue texts instead of the green ones). That’s iMessage, and if you don’t disassociate your phone number with it any texts will still go to your iPhone.

To me, this is the biggest lost in switching to Android. Apple’s iMessage offers a lot of advantages over traditional SMS and MMS messages, such as faster transmission and real-time typing notifications. Eventually this capability will come via Advanced Messaging, a feature T-Mobile is now rolling out. Until then, you may consider over-the-top messaging solutions like Hangouts or Facebook’s messenger.

One piece of advice you won’t get from Google or Apple: use a password manager. My preference is Dashlane, though 1Password, LastPass, and others are viable options. This will ease the pain of signing in to apps and web sites where you already have an account but have no idea what the password is.

Google has its own system for syncing your Chrome and Android app passwords called SmartLock, but it’s in relative infancy and not a lot of third-party developers have implemented it into their apps.

Here's the down-low on fragmentation

If you haven’t followed Android news before, prepare to hear a lot about fragmentation. That’s because outside of Nexus devices, which get their updates directly from Google, the carriers and phone manufacturers are the ones responsible for updating your device. That can cause problems for situations like the Stagefright vulnerability.

My advice is to go with one of the flagship phones, which tend to get updates more regularly. Motorola, especially, builds a stock version of Android with a couple of helpful add-ons, and the new Moto X looks promising and by all accounts has a great camera.

Also, we should see one or two new Nexus devices very soon to replace the oversized Nexus 6. Just like with the Moto X they’re unlocked devices so you won’t have to wait for the carrier to approve updates.

Once these steps are out of  the way, the key is to tinker and try things out. That’s the beauty of Android and what makes it such a compelling operating system for your mobile device, which as for most of us is probably your primary computer.