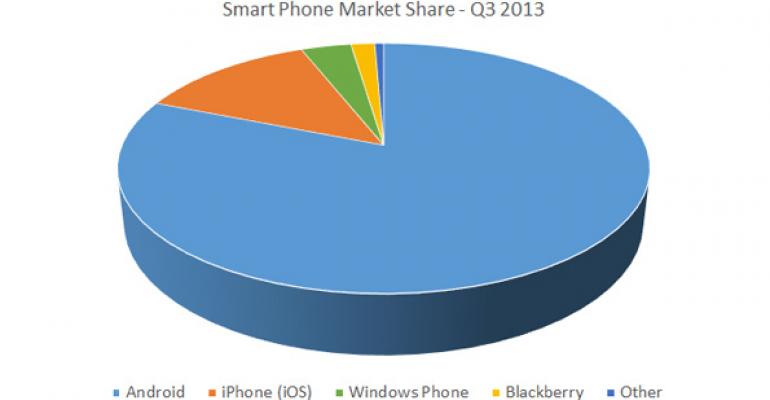 Android Now Over 80 Percent of All Smart Phones Sold

But Windows Phone is coming on strong as well

Google's dominant Android mobile OS headed into near monopoly territory in the most recent quarter according to IDC, accounting for over 80 percent of all smart phones sales. Hardware makers sold almost 212 million Android-based smart phones in Q3 2013, up over 50 percent from the same quarter a year ago. Android is now four times bigger than all competing smart phone platforms combined.

Android's success comes from three factors: The continued dominance of Samsung, the emergence of more and more "phablet"-type devices, which have proven popular in established markets, and the availability of more affordable and contract-free devices, which are important to emerging markets. The average selling price of a smart phone is down 12.5 percent to $317.

IDC notes that Samsung is the sole giant among Android hardware vendors and is responsible for almost 40 percent of total Android smart phone sales: Samsung alone sells over two and a half times as many smart phones as Apple sells iPhones.

But Android wasn't the only success story in the quarter: IDC also called out Windows Phone, which achieved 156 percent growth, year over year, growing from 2 percent of the market in Q3 2012 to 3.6 percent of the market this past quarter. IDC says that hardware makers sold about 9.5 million Windows Phone handsets in the quarter, compared to 33.8 million iPhones and 211.6 million Android handsets.

Windows Phone may be a distant number three, but it's still number three, and it's well ahead of Blackberry, which continued to circle the drain with 1.7 percent market share, down from 4.1 percent in the year-ago quarter. More to the point, Windows Phone is closing the gap with iPhone, too: Windows Phone is now 9.3 percentage points behind Apple's entry, compared to 12.2 percent a year ago.

IDC notes that Nokia accounted for over 93 percent of all Windows Phone handsets sold in the quarter. Perhaps not coincidentally, much of Nokia's growth—and thus overall Windows Phone growth—can be attributed to exploding sales of low-cost handsets like the $99 Nokia Lumia 520, which is a particularly good value.

For Smartphones, an Industry-Wide Surge to the Low End of the Market
Jul 29, 2013