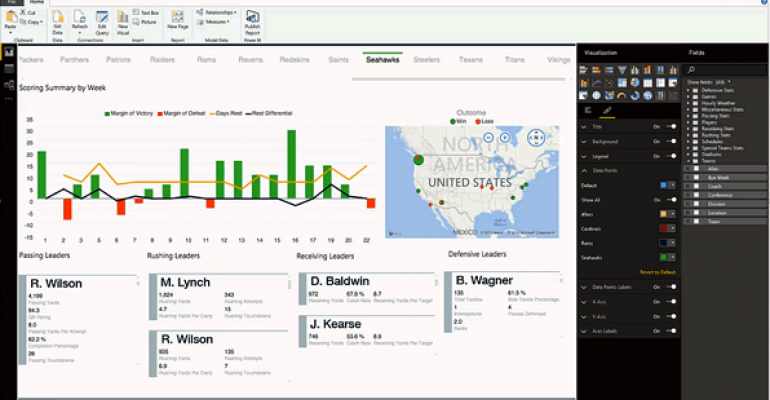 If you have not been following the new Power BI Preview, now may be the right time to jump on board. Compelling weekly releases of popular data sources, new mobile BI apps and enhancements to the desktop Power BI Designer app are reviving interest in Microsoft business intelligence around the world. Today the Power BI Preview is globally available in over 43 languages and 140 markets.

Over the the past few months we have seen an unprecedented pace of feature releases. New Power BI Designer, a free desktop data discovery tool that unifies the “power” tools: Power Query for self-service ETL and data prep, Power Pivot for sophisticated data modeling and Power View for drag-and-drop visualization into one streamlined user experience, is evolving nicely. In April and May 2015, we saw significant improvements to load performance, data modeling, calculations, DAX with intellisense and many other areas.

In Kasper de Jonge's session, we saw new functionality around complex relationships between tables, additions to the DAX language and quite a few usability enhancements to the streamlined user experience to keep in the flow of analysis. There is no more jumping around to create a new calculation or hide a field. You can merely right click to add it within the report view field list.

In various Ignite sessions, true direct connectivity to Power BI Preview was mentioned with Azure SQL Data Warehouse, Azure Streaming Analytics, Azure ML and other on-premises data sources such as SQL Server in the near future. Direct connectivity is a huge improvement for enterprise scalability over the first version of Power BI that required data copies and suffered from limited storage capacity. The demonstrated Power BI Preview direct and hybrid on-premises connectivity along with role-based security support is a game changer.

In addition to the current iPad and iPhone native mobile apps for the Power BI Preview, we also saw a new app released for Windows devices.

There are data sources released each and every week these days. It is hard to keep up. Here are a few of the latest and greatest.

If you have not yet started digging in into the Power BI Preview, create an account on PowerBI.com, download Power BI Designer and check out the collection of free training resources that are already available. Unlike the initial release of Power BI, the new Power BI Preview version is already gaining market momentum. Microsoft may finally be delivering on their promise of business intelligence for the masses.