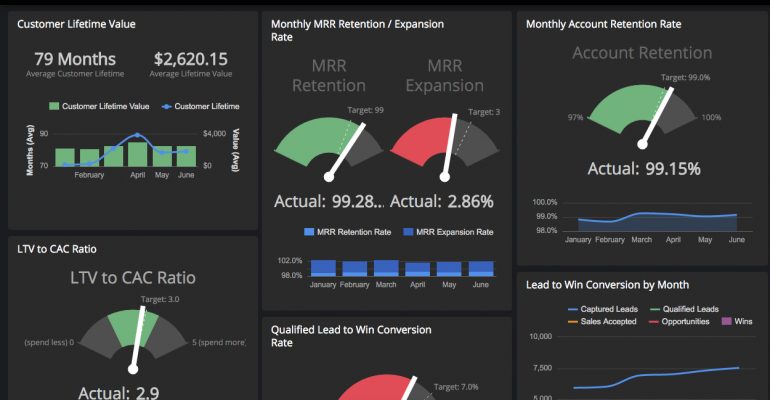 In the future, everyone will be a data scientist for 15 seconds

While Microsoft has been busy expanding SQL Server's power — and making it more welcoming to a variety of users — other companies are also working hard to put analytics in the hands of everyone, and that means boiling down big data to bite-sized charts.

That was one of the goals of Jebbit's Nicholas Lemieux when he joined the company as director of marketing.

At his previous role, he had hand built an internal analytics dashboard, but as a employee number eight, he wasn't eager to do it again — nor did he have time.

But he did see the value in broadly shared analytics.

Whether you're B2B or B2C, making all your high level sales and marketing efforts accessible to the company is extremely important in building their trust and in having the ability to inform the day-to-day decisions on the fly with the most confidence, said Lemieux.

Even little things connected with traditional analytics tools, like a login, ended up being huge barriers in getting the data out there.

So Lemieux looked for a few key traits when deciding how to display his company's data internally:

He settled on Klipfolio, a company which was founded in 2001 when it felt like widgets would rule the world (remember those web-fed desktop widgets that would show you everything from current stock prices to the latest Dilbert cartoon?).

Fortunately for our desktops, we collectively woke up from our widget madness, but business still found a need to pull together lots of data sources for a quick overview of how the business was doing day-to-day — and Klipfolio reinvented itself to help meet that need.

And while Klipfolio isn't hoping to take the crown of Microsoft BI or Oracle's offerings, customers are finding that having something a little more accessible at the grassroots means less red tape and more agility in decision making.

We're first addressing the places where there's nothing, they don't have a BI team or they might have a person, said Klipfolio's Mychelle Mollot. We're helping them get at the key performance indicators without having to spend tens of thousands of dollars. With bigger companies, we help them be more agile on top of their BI infrastructure.

And for Jebbit's Lemieux, that was exactly the need to fill: To help everyone on staff become a little more data literate and more data aware while ensuring that process fit into daily routines.

Using Klipfolio, he set up six big screen TVs that broadcast key metrics around the office.

One shows the performance of our product, so we're measuring things like customer conversion rates, volume of traffic to their sites, and other granular metrics, he said. Higher level charts are developed and sent daily, weekly, and quarterly to the CEO and board members.

Openness does have its limits, however, such as when a client or prospective client comes to visit.

Do we really want them to see these on the board? Lemieux said. In those cases, Jebbit has set up a fail safe, leaving off existing customers' names and numbers, and instead showing more generic — and impressive-by-design — growth and engagement numbers.

Apps That May Help Enterprises Get Through the Pandemic
Apr 22, 2020