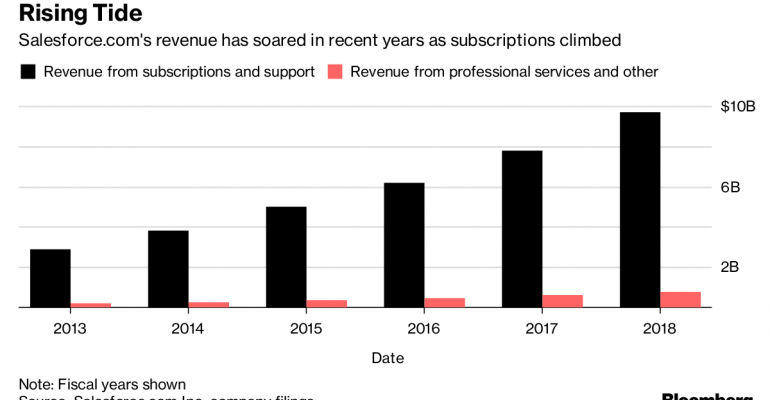 Salesforce Doubles Down on Small Businesses With Software Swap

The market leader in cloud-based software that manages client relationships is rolling out a new product package, called Essentials, aimed at the small businesses that make up about one third of Salesforce’s customer base.

(Bloomberg) -- Salesforce.com Inc. is doubling down on its small-business base after years of focusing on large customers.

The market leader in cloud-based software that manages client relationships is rolling out a new product package, called Essentials, aimed at the small businesses that make up about one third of Salesforce’s customer base. The shift is a recognition that there are young, nimble startups like SugarCRM Inc. chasing Salesforce in that market and the company can’t be complacent.

San Francisco-based Salesforce in recent years has targeted big contracts with top companies in a bid to edge out rivals Oracle Corp. and SAP SE. The strategy has paid off, with Salesforce retaining twice as many $20 million-plus deals as of Jan. 31 as it had a year earlier. While these lucrative relationships have been a boon to the company’s overall revenue growth as it chases $20 billion in sales by 2021, they’re also expensive to pursue and maintain.

“We’re not just going to sell to big enterprises,” Mike Rosenbaum, an executive vice president at Salesforce, said in an interview. “Small business is at the heart of Salesforce and always will be.”

The Essentials line marks a shift in strategy for Salesforce, away from offering smaller clients discrete apps and instead bringing them onto its core platform. In the process, Salesforce has also discontinued two products for small companies that it had absorbed through acquisitions.

In its earnings report last month, the company touted closing 43 percent more $1 million-plus deals in the fourth quarter than a year earlier, but the business was more expensive to capture. Marketing and sales costs rose 25 percent to $1.36 billion in the period.

Small and mid-sized businesses, by contrast, aren’t as expensive to sell to, since they often subscribe to tools online and don’t require the travel costs associated with landing large deals.